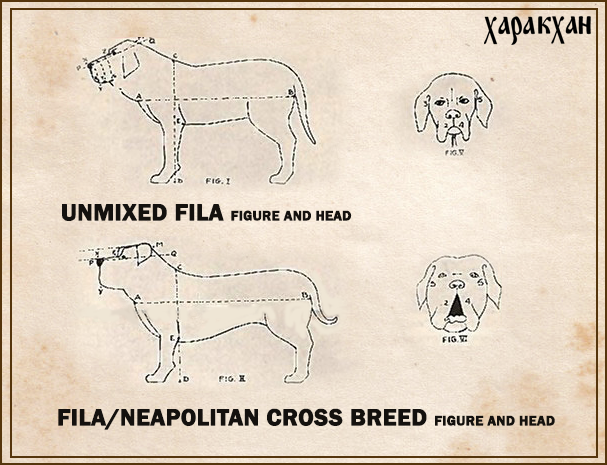 Fila Brasileiro mix breeding – Fila Brasileiro was most frequently crossed with a Neapolitan Mastiff, English Mastiff and Great Dane to gain in height, weight  and color. Cross-breeding with other races in the second half of the 20th century seriously violated the standard of race, so in 1979 a new standard was issued that warned of the characteristics obtained by mixing with the said races.

FIGURE – A length of the body (from chest end to rump end) surpasses its height (from withers to the ground). Height is divided in 2 equal halves (from withers to the sternum, from elbow to feet). Fila Brasileiro has a body that expresses a mighty concentration of power, as well as sgility, speed and resistance.

HEAD PROFILE – The head is divided in 2 almost equal parts: muzzle and skull (muzzle is a somewhat smaller than the skull). Upper line of the muzzle slightly changes direction. Stop is almost inexistent. The upper line of the skull makes a slight curve (although curved the line is low). The occipital sticks out. Perfect muzzle curve, lower line of the muzzle is described by the upper lips; evident labial commissure. Ears arise under the eyes line and surpass it only when the dog is alert. They are inserted at the rearest part of the skull and are usually large.

HEAD FRONT – The muzzle should appear on both sides of the nose (nose doesn’t fill the front). Curve of the upper lip is sharp and symmetrical. Scissors-shaped bite. Wide apart eyes, inserted on the gross skin. Superciliary arches form 2 elevations, as if the forehead was cleaved in two.

COLORS – Yellow, ranging from light to chestnut brown, including a light grayish and reddish yellow. With or without a black mask and ears. Masks are restrained to the muzzle. Striped where the bottom is in all hues of yellow (prevailing golden or reddish yellow). The stripes are small, thin, with the same width all along its length, irregularly distributed. Linking along the vertebral column forming a “V”. Few or many stripes. White marks usually on fingers, or going up till the wrists; on the chest (maybe going up to the neck and forming a “necklace”); tip of the tail. The color of the eyes tend to the yellow in all its hues.

Cross breeding with a Neapolitan Mastiff

Lengthened figure, appearing weighty, with short legs and very wide chest. The upper line of the body is concave (saddle back), resulting in a high set rump and tail that is short and tends to wrinkle and fall over the back. The bottom line is reversed; concave in the chest area (as a sleeping net) and convex in the abdominal area.

A wide skull, rounded on the sides, like a ball. Proportionally, the muzzle looks narrower. Ears highly positioned. Rounded stop, formed from a high-pitched frontal bone. Too wrinkly skin. The mouth forms a sharp angle. The muzzle is shaper by a upper lip. From the profile, depth of the muzzle is equal to or greater than the length. Looking from the front, the muzzle is narrow, so the nose occupies the whole front part of the muzzle. The facial expression – like the dog is boring himself, eyes half-closed, mouth open, top of the tounge sticks out.

Fila Brasileiro | Tosa inu Many people think that watch dog is the same as... 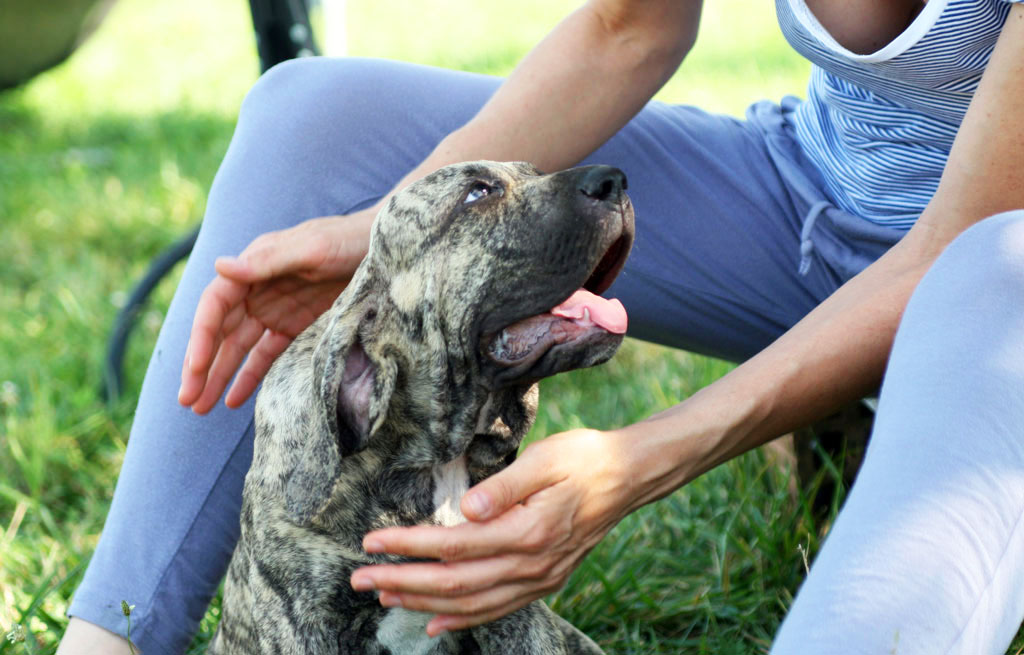 Dogs against stress - Dogs are a tremendous help in stress relief. It is scientifically...

Any cookies that may not be particularly necessary for the website to function and is used specifically to collect user personal data via analytics, ads, other embedded contents are termed as non-necessary cookies. It is mandatory to procure user consent prior to running these cookies on your website.